More than 50 years ago, Congress enacted a vision that radically changed the landscape of the  United States. The Land and Water Conservation Fund has kept hundreds of thousands of acres of public lands beautiful and safe.

The LWCF was signed into law in 1964, creating a unique mechanism to fund conservation projects using money from offshore oil and gas operations. This innovative funding source allowed LWCF to receive bipartisan support for decades, without costing taxpayers a penny. The LWCF grant process reimburses 50% of a public lands infrastructure program that has been instrumental in the creation and improvement of parks and forests throughout the entire country.

Since its signing, LWCF has contributed over $333 million to support Ohio’s public lands portfolio. Chances are that the program has aided the park in your neighborhood where you had your first date, or where you have your family reunions, or maybe your community’s pool where you taught your kids how to swim. Wherever you experience Ohio’s public lands, you have likely enjoyed an LWCF-funded park. 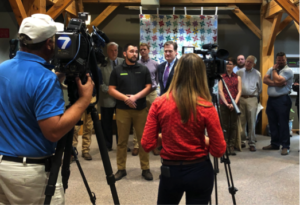 This fund was put in jeopardy after Congressional leadership allowed this program to expire on September 30, 2018. But, OEC members took action and sent 4,600 messages to our decision makers. You helped us meet with 14 representatives, who, thanks to your support, all voted to reauthorize this precious fund, getting projects back underway.

Representative Mike Turner (OH-15) joined us at a metro park in Dayton to speak with other interested parties and local media about LWCF. Several groups were represented at the meeting, including Five Rivers MetroParks, the Ohio Parks and Recreation Association, Ohio Veterans Outdoors, Backcountry Hunters and Anglers, and the Western Reserve Land Conservancy.

We also took Representative Steve Stivers’ (OH-10) chief of staff and a staff member from Senator Sherrod Brown’s office to a local park. This event was located at Battelle Darby Metro Park, the largest metro park in the state, which protects portions of a national scenic river, and has a small herd of bison. Partner groups in attendance included Columbus and Franklin County Metro Parks, a local faith leader, and other parks advocates. 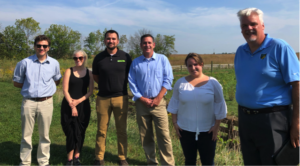 We partnered with the Ohio Parks and Recreation Association on a sign-on letter for beneficiaries and interested groups, resulting in more than 81 signers, and an additional city that wrote their own letter. These letters were then used in our meetings with Ohio’s Congressional Delegation. This also served as a good way to get engaged with LWCF beneficiaries (both past and potential), as well as other conservation groups, businesses, veterans, faith groups, and sportsmen throughout the state. We also had the opportunity to travel to Michigan to speak with other businesses, discussing our work in Ohio on LWCF efforts.

You may have also seen other blogs about local LWCF work. If you missed them, check them out:

We were also featured in many local news outlets, including:

Needless to say, Ohioans saw the benefit in the LWCF and came together to save it. This victory shows that if we stand together, we can do big things for our lands, for our health, and for our country.