Urgent Action Needed: Call on Gov. DeWine to Stand Up for Ohio’s Environment in the Budget Bill 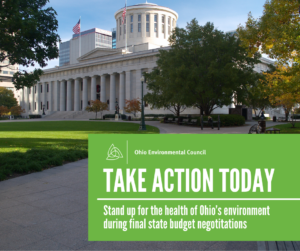 We are in the final hours of Ohio’s state budgeting process and we need your help!

The state budget sets policy priorities for the next two years and beyond. A good state budget is vital to protecting our environment. That’s why the Ohio Environmental Council closely watches this process and speaks out to ensure funding and policy changes benefit Ohio’s environment and our communities.

The introduced version of the budget bill was one of the most robust and supportive budgets for clean water and for the protection and expansion of public lands. Unfortunately, as the bill moved through the process, the environment was deprioritized and funding for important programs was cut. Additionally, an amendment added fairly late in the process upends vital democratic systems that could prevent a fair redistricting process this year and have negative impacts on citizens’ ability to fight environmental harms in the courts.

We’re speaking out against these worrisome changes—and need your help!

The power of our combined voices can not be overestimated. Please take action with us today to ensure a healthier, safer, and cleaner environment for all Ohioans.