This summer, the OEC had the pleasure of hosting five amazing interns to work with us on a variety of different projects and campaigns related to local and state-wide issues in Ohio. Cecilia Ribordy developed a storytelling project with Emily Bacha and the rest of the communications team related to environmental injustice issues in our region. Read more about Cecilia’s experience in environmental advocacy below:

It all started when I was about four years old. My parents decided to move away from the chaos of the city of Sao Paulo, Brazil and into a much smaller, rural town about two hours away. Smack-dab in the middle of nowhere. We were surrounded by nothing but farmland 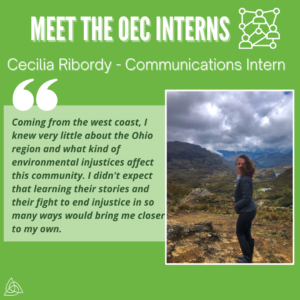 and rainforest. Brazil is home to two important rainforests: the Amazon rainforest, which is located in the northern part of the country, and the Atlantic rainforest, which is located in the southern region where I spent most of my childhood. While the Amazon remains a popular tourist destination in Brazil, people seldom explore the Atlantic rainforest because, well, most of it is already gone. About 82% of the original area has been deforested, and what remains is under constant threat of extinction.

I grew up seeing these statistics become a reality. I remember playing outside in my backyard as a kid and smelling smoke from a forest clearing happening nearby. A few days later, I’d see beautiful lush forest canopies being replaced with grazing areas for cows.

The more clearings that happened, the worse our roads became: heavy rains would flood the roads for days, making it impossible for the bus to travel down to our bus stops. Limited access to public transportation affected almost everyone in my neighborhood: when it rained, people couldn’t get to work, to school, or to their doctor appointments. My parents, one of the few people in my neighborhood who owned a car, would often give rides to neighbors who needed it.

That’s how I became close to one of my best friends in elementary school. Of course, as a child, I could not articulate how the changing environment around me was disproportionately affecting my friends living in poverty and limiting their access to basic rights, like education, health services, and a livable wage. But I could tell you that poorer kids took a lot longer to get to school than the richer kids, and sometimes, they wouldn’t show up to school at all, depending on how much it had rained.

Something about that always felt unfair to me.

Fast forward to my freshman year of college: I signed up for an “environmental science for non-majors” class, aka, the easiest class I could sign up for that would get my GE requirement out of the way. I had no idea, but it was in this class that I’d discover my passion for the environmental justice movement.

I remember the day my professor explained the concept of virtual water and how it could be used to illustrate food injustice in the Peruvian desert. My mind was blown. Learning about the connection between society and environment was pivotal for understanding the injustices I’d witnessed as a child in deeper ways. It validated the feeling I held at a young age that the everyday phenomena I was witnessing in Brazil, what so many people considered “just a normal part of life,” was indeed unjust.

More importantly, it allowed me to conceptualize the interconnected nature of my experiences to our seemingly large world and understand how fighting to end injustice anywhere is fighting to end injustice everywhere. I do work in the environmental movement because I see my neighbors, family, and loved ones in all those that are disproportionately impacted by climate change. Their stories of struggle, resistance, and resilience guide my work and give me the strength to keep pushing when I am uninspired by the often stagnant progress towards just environmental change.

One of my favorite Audre Lorde quotes goes something like: “when I dare to be powerful, to use my strength in the service of my vision, then it becomes less and less important whether I am afraid.” As a queer, Latina immigrant still finding my place and voice in the movement against systemic violence, I am often afraid. Yet when I envision a world where those who I hold close to my heart seldom have to struggle to live a dignified, fulfilling life, I am propelled to use every skill in my toolbox to further the work towards environmental and social justice. This is my fuel and my drive towards being in this work.