We are watching the Ohio Redistricting Commission very closely…

They aren’t giving us the opportunity to testify at a public hearing this time around. At least not yet. The public can submit comments directly to the Commission on its website, but the comments must be 1000 characters or less.

The OEC Democracy Team is hard at work organizing people to submit comments, support the work of decision-makers who want to pass fair maps, and prepare for any future legal challenges, if necessary.

To that end, if we had the opportunity to testify at a hearing before the Ohio Redistricting Commission, here’s what we would say…

To the honorable members of the Ohio Redistricting Commission:

In addition to public comments provided on the Ohio Redistricting Commission’s website, I am submitting longer comments directly to each of you on behalf of the Ohio Environmental Council (OEC). The OEC is a 53-year-old environmental advocacy organization committed to ensuring clean air, safe water, vibrant public lands, and a healthy democracy for all who call Ohio home. Our more than 3,000 members statewide are closely watching this redistricting process, as they are very aware how the democratic systems of the Ohio Statehouse directly affect the health of our communities and environment.

Ten years ago, when Ohio last considered its legislative district maps, I wasn’t even yet old enough to vote. I came of age during a tumultuous economic recession, watching the impacts of perpetual war overseas while becoming increasingly worried about the looming threat of the climate crisis. And for the past ten years, I’ve seen Ohio ignore the risks of environmental injustice. A supermajority of Ohio’s legislators do not act in response to the will of its electorate.

Throughout the 2021 redistricting process, there was an opportunity for a bipartisan effort to create fair maps for all Ohioans, following the rules outlined in Article XI of the Ohio Constitution. I was hopeful, alongside hundreds of my fellow Ohioans who submitted written and verbal testimony at hearings held in August and September 2021. Unfortunately, Ohio politics followed the same path it has taken for much of my adult life, catering to partisan interests rather than the interests of Ohioans. Five members of this Commission passed a map designed to enshrine a supermajority of one political party at the expense of the other.

And the Ohio Supreme Court invalidated that map just over a week ago.

The Ohio Supreme Court has made the mandate of Article XI, Section 6 abundantly clear: the Ohio Redistricting Commission must attempt to create a map that proportionally represents the partisan voting patterns of Ohioans over the past ten years. The Commission must attempt to make a map that does not favor one party over another. In other words, according to the Ohio Supreme Court:

“If it is possible for a district plan to comply with Section 6 and Sections 2, 3, 4, 5, and 7, the commission must adopt a plan that does so.” League of Women Voters v. Ohio Redistricting Commission, ¶ 88. 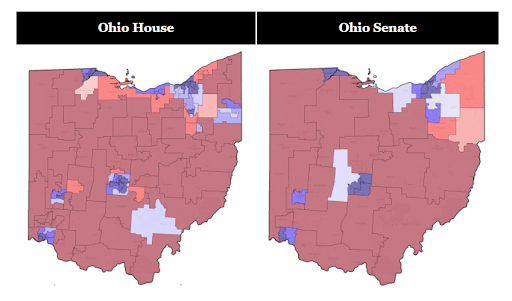 As the Ohio Citizens’ Redistricting Commission defined it, and as supported by the explicit language of the Ohio Constitution, Article XI, Section 6 requires a map that must closely reflect the partisan makeup of the state. In the five statewide general elections that have taken place over the past decade, Republican candidates for President, U.S. Senator, Governor, Secretary of State, Auditor, Attorney General and Treasurer have received 54.3% of the votes cast by Ohio voters, while Democratic candidates for those offices have received 45.7% of the votes cast. To ensure that the composition of the General Assembly corresponds closely to the preferences of Ohio voters, the districts should also reflect this split to the extent possible when assessed statewide.

The OEC also notes the Commission’s current region-by-region approach to mapmaking may not be sufficient to satisfy the requirements of Article 6. If the ultimate map, agreed upon region-by-region, does not meet the proportionality requirements, agreements made in each region should be revisited holistically. The Commission needs to agree on a complete map, and that complete map needs to meet all rules in Article 6, regardless of what compromises occurred during mapmaking negotiations.

Under our current maps, Ohio has many districts that crack apart communities and connect disparate communities with wildly different environmental experiences and resource access. The deliberate cracking of communities dilutes the power Ohioans have to advocate for their right to clean air, safe drinking water, and a fair democracy.

Without a functioning and fair democracy, Ohio will continue to perpetuate environmental injustice. The passage of environmental protection laws should never become a partisan political tool as if we are not debating real human lives in our communities.

Make no mistake, Ohioans will not accept half-measures in this remedial process. The Ohio Supreme Court sided with voters and the expectation for the Commission is a plan that fully satisfies the mandatory requirements of Article XI, Section 6.

We sent the above testimony to the email inboxes of the Commissioners: info@redistricting.ohio.gov. Our team also submitted the following directly on their public comment portal:

Without a functioning and fair democracy, Ohio will continue to perpetuate environmental injustice. The passage of environmental protection laws should never become a partisan political tool as if we are not debating real human lives in our communities. Do the right thing; follow the Ohio Supreme Court’s strict guidance. (Comment submitted on behalf of the Ohio Environmental Council)

SUBMITTED PUBLIC COMMENT (Callia Téllez)
Throughout the redistricting hearings held in 2021, the OEC has used the US EPA EJScreen Mapping Tool (https://www.epa.gov/ejscreen) to illustrate how gerrymandering aggravates the harms of environmental injustice. The low-income communities of color facing disproportionate exposure to air pollution, toxic wastewater, and lead are often the same communities disenfranchised by the maps struck down by the Ohio Supreme Court.

While the EJScreen Tool and our repeated calls for justice shine light on patterns of environmental hazards shared by certain communities across Ohio, Black, Indigenous, and People of Color communities in Ohio are not a monolith. The onus is on the Ohio Redistricting Commission to do the work required to understand the unique experiences and nuances of health inequities, voter suppression, redlining, and environmental injustices of the constituents most affected by gerrymandering. We strongly urge the Ohio Redistricting Commission to reflect all Ohioans in the new maps.

The OEC is continuing our fight for fair maps.

To learn more about our approach to redistricting, check out our work featured by the Brennan Center for Justice, Yale Climate Connections, and Inside Climate News.