This summer, the OEC had the pleasure of hosting five amazing interns to work with us on a variety of different projects and campaigns related to local and state-wide issues in Ohio. Lupe Franco joined our water team leads, Melanie Houston and Pete Butcher, in helping advocate for clean and safe drinking water for all who call Ohio home. Read more about Lupe’s experience in environmental advocacy below:

As a first-generation Chicanx female, one of the proudest identities I carry is having grown up in the beautiful community of Boyle Heights, located on the outskirts of Downtown Los Angeles, CA. I grew up in a time in which Boyle Heights was loved for its rich culture, history, and traditions but was also known for its minimal open space, gang activity, high dropout rates, poverty, and pollution. 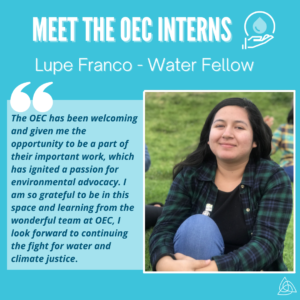 At a young age, I developed asthma due to the overwhelming pollution emitted from cars traveling on the freeways that surrounded my neighborhood. This urban setting unconventionally sparked my passion for environmental protection. Although I had less access to the traditional idea of an environment, it was the downtown skyline, my neighbors, and friends that I considered to be my environment.

As I entered California State University, Los Angeles, my interest in the environment led to a variety of aspirations and opportunities. I wanted to be a film director at first, then a scientist. For a while, I even dabbled in engineering until I quickly realized that math was not my friend. Finally, I found Geology and took several courses that led me to the outdoors, where I went camping and hiking in a few of Southern California’s most beautiful areas.

After graduating, I found that my interest in the urban environment was not fulfilled, and I wanted to learn more about environmental protection. I was selected for an 11-month AmeriCorps fellowship with CivicSpark, where I was placed with the Southern California Association of Governments, the West Coast’s largest metropolitan planning organization. I learned about regional urban planning and environmental justice while working in this position, which was an eye-opening experience that shifted the course of my interests. I observed how communities like mine were disinvested and experiencing health issues as a result of inequitable environmental conditions.

With this new perspective, I believed that the groups most overburdened and suffering from environmental injustice were unhoused communities. Despite this group being particularly vulnerable to the effects of climate change, they are not considered as a community of concern in the environmental justice debate. Because of this knowledge gap and my desire to learn more, I decided to attend graduate school and enrolled in San José State University’s Environmental Studies program, from which I graduated in May 2021.

This summer, I embarked on a new opportunity with the Environmental Fellows Program, which was founded by Dr. Dorceta Taylor, and the University of Michigan. Thanks to the wonderful donation from the Charles Mott Stewart Foundation, I have the opportunity to be placed with the Ohio Environmental Council as their water fellow. This new opportunity is outside of the work that I have done previously, which is why I am so excited about learning about the incredible work and advocacy that the OEC does. After completing this program, I plan to attend the UC Davis Geography Ph.D. program, where I intend to continue researching environmental justice issues and fighting for everyone’s right to a clean and safe environment.