It’s no secret that Ohio’s congressional and state legislative district maps are gerrymandered. For too long, politicians have rigged Ohio’s electoral maps to preserve political power and silence the voice of our communities. Because of these maps, our legislators often fail to respond to Ohio voters’ views on pressing issues like renewable energy and the fight against climate change.

The importance of fair maps that truly represent Ohio’s communities cannot be understated. Without a fair and truly representative democracy, Ohioans will continue to face environmental injustices from big polluters. With solid maps, the General Assembly and our Congressional delegation will amplify the voices of Ohioans. Together, we can secure healthy air, land, and water for all who call Ohio home.

Building on our team effort to get all Ohioans counted in the census, the OEC will continue to work with partners to demand a transparent, inclusive, and fair redistricting process.

There are many opportunities to get involved in this important process: learn more about the intersection of environment and democracy, build your own map, and connect with your elected officials to share why fair districts matter to you.

To learn more about our approach to redistricting, check out our work featured by the Brennan Center for Justice, Yale Climate Connections, and Inside Climate News.

JUNE 2022 UPDATE
At the end of May, a federal court unfortunately imposed an unconstitutional map upon all Ohioans. The map will only be in place for 2022, and the fight for fair maps for the rest of the decade continues in the Courts and elsewhere. The Ohio Supreme Court has continually upheld the will of the people when invalidating the Commission’s maps. But if the Commission will not make a fair map, Ohioans will need to consider other options to ultimately achieve the result they all deserve.Stay tuned for more redistricting advocacy opportunities! For now, we encourage everyone to vote in the upcoming August 2 Primary, which you can learn more about here.

MAY 2022
The fight for fair maps continues as we look toward the summer. In early April, the Ohio Supreme Court invalidated the Commission’s statehouse map for a fourth time. In response, the Ohio Redistricting Commission passed another gerrymandered map on May 5, 2022—actually submitting the third map (already invalidated) for a second time. Our attorneys at the Brennan Center for Justice immediately appealed the map.

The statehouse redistricting battle also found its way to federal court, where a three-judge panel has ordered the implementation of the third map by May 28 if Ohio cannot create a constitutional map before that date. Our fight at the Ohio Supreme Court is essential to ensuring Ohio creates a fair map, rather than an unconstitutional map enforced by the federal court.

The fight for a fair Congressional map also continues before the Ohio Supreme Court. On May 5, 2022, the OEC filed an amicus brief alongside eight other advocacy organizations in favor of fair maps. You can read our brief on our website to learn more about the direct relationship between gerrymandered congressional districts and our environment here in Ohio.

MARCH 2022: On March 16, the Ohio Supreme Court struck down gerrymandered statehouse maps for a third time! We’ll have more in-depth updates from our attorneys at the Brennan Center for Justice soon.

On March 2, the Ohio Redistricting Commission passed another gerrymandered congressional map. The map ensures the following:

Two sets of plaintiffs have already appealed the map at the Ohio Supreme Court, arguing that it violates the Ohio Constitution’s anti-gerrymandering provisions yet again. The Court is currently considering responses from the appealing parties and the Commission itself, and we expect an answer from the Court before the end of March.

FEBRUARY 2022:  On February 7, for a second time, the Ohio Supreme Court rejec­ted state legislative maps passed by the Republican majority of the Ohio Redistricting Commission. The court found that this second set of maps viol­ated the state consti­tu­tion’s prohib­i­tions against partisan gerry­man­der­ing and fell short of its propor­tion­al­ity stand­ards. And the bipartisan majority of justices demanded Republican members of the Commission work with their Democratic counterparts to draw fair and constitutional maps.

On February 24, a majority of the Republican members of the Ohio Redistricting Commission approved a third set of state legislative maps—a full week after a court-ordered deadline with no input from the public. Once again, the OEC and our partners opposed these maps because we believe they are still gerrymandered. On February 28, we filed objec­tions with the Supreme Court of Ohio. We argued that the new maps, like their prede­cessors, viol­ate the Ohio Consti­tu­tion’s prohib­i­tions against partisan gerry­man­der­ing.

The Ohio Supreme Court gave members of the Ohio Redistricting Commission ten days to redraw Ohio’s state legislative maps. Despite ongoing objections by the Democratic members of the Commission, the Republican majority approved another gerrymandered legislative map—just hours before the court deadline with no input from the public—on the evening of January 22. The OEC and our partners filed a petition with the Supreme Court arguing that the new maps, like their predecessors, violated the Ohio constitution’s prohibitions against partisan gerrymandering.

DECEMBER 2021: In late September, the OEC joined forces with the Ohio Organizing Collaborative (OOC), the Council for American Islamic Relations (CAIR-Ohio), and six individual plaintiffs to challenge the gerrymandered state house redistricting plan. Together, we’re represented by the Brennan Center for Justice out of New York University and the law firm Reed Smith.

After two months of legal procedural work, we’ve reached our day in court. On December 8, 2021, our counsel will argue with attorneys for the Ohio Redistricting Commission before the seven justices of the Ohio Supreme Court.

SEPTEMBER 2021: On September 15, 2021, the Ohio Redistricting Commission passed a gerrymandered, unconstitutional legislative statehouse map. The process voted on in 2015 resulted in a four-year map that will most likely be taken to court.

The OEC and our Equal Districts Coalition partners are ready to keep fighting for a better statehouse map. Follow us on social media to stay up-to-date on the most recent news regarding redistricting!

In the fight for fair maps and equal districts, the OEC is also proud to support the efforts of the Ohio Citizens’ Redistricting Commission (OCRC), an independent non-partisan commission made up of Ohioans from a variety of backgrounds, regions, and communities. This diverse grassroots commission has supported public education on redistricting, facilitated citizen engagement in community map-making activities, and held public hearings in a wide range of communities to provide robust public input throughout Ohio’s 2021 redistricting process.

AUGUST 2021: In late August 2021, the commission produced Unity Maps for Ohio’s state legislature.  The maps focused on upholding the constitutional amendment passed by Ohioans in 2015 and preserving communities of interest within one district. While the Ohio Redistricting Commission approved gerrymandered maps, we’ll continue uplifting the OCRC map as the ideal, constitutional map Ohioans deserve. 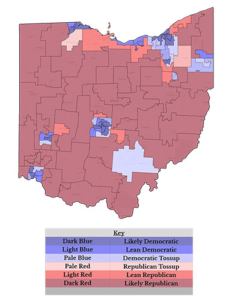 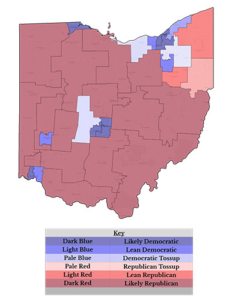 To learn more about the OCRC’s process in creating its Unity Maps, visit its website.