The Wind is Blowing: Let’s Harness it and Power the Future

Ohio holds a unique place in the history of wind energy development. In 1888, Cleveland-based engineer, Charles Brush, installed the first-ever electricity-generating wind turbine at his home on Euclid Avenue. A generation later, from the mid-1970s – early 1980s, the NASA Glenn Research Center (also in Cleveland) conducted the United States’ Wind Energy Program, which aimed to develop and refine the wind technologies that are the basis of modern-day wind turbines.

Ohio has ample wind resources in various regions which by 2017 had brought just over 600 megawatts of wind online in the state. Wind energy in Ohio has cut back on over 3.5 metric tons of carbon dioxide emissions, which is the equivalent of taking 744,000 cars off the road. 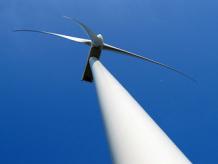 In addition to environmental benefits, wind power has yielded over $33 million in land lease payments to Ohio property owners, and nearly $20 million in local tax revenue, that is primarily distributed to local school districts.

Corporate America is driving an unstoppable trend towards renewable power. Over half of the nation’s Fortune 500 companies have set targets to reduce greenhouse gases, improve efficiency, and purchase wind and solar energy directly from project developers, as opposed as from their electric utility. Because Ohio allows direct purchases of power, wind energy is viewed as just one path forward for these companies’ meeting and exceeding their own corporate sustainability goals, right here in Ohio.

There are tremendous examples of this trend in the private sector, such as Whirlpool, General Motors, and Ball Corporation all building new wind farms to power their manufacturing plants here in Ohio. However, we are being left behind in this new, wind-powered era.

Siting of wind turbines in Ohio undergoes a rigorous regulatory review at the Ohio Power Siting Board, an office within the Public Utilities Commission of Ohio (PUCO) that consists of experienced staff as well as experts from state agencies who review applications to build new large scale wind farms in the state.

State agencies such as the Ohio Departments of Natural Resources (ODNR), Health (ODH), Environmental Protection (Ohio EPA), Agriculture (ODA), and others work to ensure any proposed project follows the law and regulations stipulating where turbines can be built, and the wind developer’s data, studies and plans for how they will minimize and mitigate any potential impacts to land, water, birds and/or bat populations, or other wildlife, etc.

Unfortunately, in 2014 the Ohio General Assembly dramatically changed the criteria that large scale wind projects had to follow in terms of siting wind turbines.

An amendment that was added at the eleventh hour in a budget bill process – with no public testimony or justification – increased the minimum distances that wind turbines had to be constructed from a neighbor’s property line. As a result, Ohio is now known as a state with the most restrictive statewide property line setback requirements, according to the National Conference of State Legislatures.

With each season and each year that goes by, Ohio is losing out on tremendous economic and environmental benefits that wind energy can provide our state. It is estimated that approximately $4 billion in economic opportunity is at risk if the wind turbine siting issue remains as it is, stalling the state’s progress in the clean energy era.