An Attack on our National Monuments

Over a century ago, the American system of public lands conservation was accelerated into one that could protect important cultural, historical, and natural lands that were under threat. On June 8, 1906, President Theodore Roosevelt signed into law the Antiquities Act of 1906. This legislation gives the president the authority to designate “historic landmarks, historic and prehistoric structures, and other objects of historic or scientific interest that are situated upon the lands owned or controlled by the Government of the United States to be national monuments.”

The signing of this law enabled for the first time the general legal protection of natural and cultural resources in the United States. Through this act, places like the Statue of Liberty and the Grand Canyon have been protected. Since 1906, over 150 monuments have been protected by 16 presidents (8 Republicans and 8 Democrats). Nearly half of our current National Parks were first protected as National Monuments, such as Joshua Tree, Acadia, and Zion.

Here in Ohio, we have had two monuments that have been protected by the Antiquities Act. In the Dayton area, the Charles Young Buffalo Soldiers National Monument memorializes the life of soldier, diplomat, civil rights leader, and National Park Superintendent Charles Young, as well as African Americans who served in the U.S. Military and were some of the first caretakers of the national parks. In the Chillicothe area, the Hopewell Culture National Historical Park was created from a National Monument, and serves as a testament to the culture and lives of Native Americans who built large earthwork complexes in the area.

This is not a partisan issue. This is an issue about protecting the land and water that gives us clean air, clean water, and enjoyment of nature. Without the Act, we wouldn’t have as many opportunities to experience and enjoy the outdoors, as well as understand and appreciate our historical and cultural history. Our public lands belong to all Americans. These are the lands that we use to hunt, fish, and hike. We rely on these lands to produce clean air and water, and the Antiquities Act is an essential tool to protect them with. Instead of eliminating protections, we should increasing them.

“We have become great because of the lavish use of our resources and we have just reason to be proud of our growth. But the time has come to inquire seriously what will happen when our forests are gone, when the coal, the iron, the oil and the gas are exhausted, when the soils have been still further impoverished and washed into the streams, polluting the rivers, denuding the fields, and obstructing navigation. These questions do not relate only to the next century or to the next generation. It is time for us now as a nation to exercise the same reasonable foresight in dealing with our great natural resources that would be shown by any prudent man in conserving and widely using the property which contains the assurance of well-being for himself and his children.”
-President Theodore Roosevelt 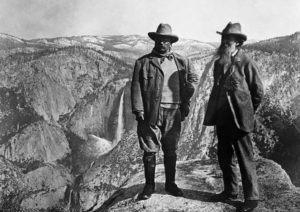 The signer of the Antiquities Act had a long history steeped in the conservation movement, and made advances for our environment that have withstood the test of time. Without Theodore “Teddy” Roosevelt, many of our parks and protected public lands wouldn’t exist today.

From a young age, Teddy was interested in the outdoors. Often described as a sickly, frail child, he spent much of his time reading and exploring outside. A collector, he began studying all sorts of animals that he could find. This exploration and understanding of nature continued into adulthood, where he would become known as the “conservationist president.”

In a time of westward expansion, Teddy realized that the abuse and misuse of natural resources was going to end in the complete destruction of nature. During his presidency, he utilized his authority to cement our wild places into America’s natural heritage. He created the United States Forest Service, which manages our national forests, and established 150 national forests. He signed the Antiquities Act, and created 18 national monuments. He established 5 national parks, 4 national game preserves, and 51 federal bird reserves. All told, President Roosevelt protected approximately 230 million acres of public land.

“There can be no greater issue than that of conservation in this country.”
– President Theodore Roosevelt

Today marks the 100th anniversary of the National Park Service