Lake Erie and surrounding watersheds have been impacted by toxic algal blooms for more than two decades, and the problem is only getting worse. Over 11 million people, approximately 3 million Ohioans, get their drinking water from Lake Erie.

We cannot waste any more time.

What are toxic algal blooms?

Toxic algal blooms occur when algae grows out of control while producing poisons that can be more toxic than cyanide and can cause illness, irritation, or even the death of pets, livestock, wildlife, and people. These toxic algal blooms are exacerbated by runoff of chemical fertilizer and manure from urban landscaping and agricultural fields. Chemical fertilizer and manure are often referred to as nutrients as they contain phosphorus and nitrogen which are important components to growing crops. Too much of anything, however, is never a good thing and such is the case with too much nitrogen and phosphorus entering our waterways from urban and rural sources. The algae plaguing many of Ohio’s waterways right now are not truly algae at all, rather they are a bunch of bacteria – cyanobacteria to be exact – but cyanobacteria is commonly referred to as blue-green algae, harmful algal blooms (HABs) or toxic algae. Not only can these toxic algal blooms cause serious health and economic issues, they also cause the expansion of the dead zone within Lake Erie. As the algae dies off it consumes readily available oxygen which increases the “dead zone”, an area with low to no oxygen, where wildlife cannot exist.

What was the Toledo Water Crisis? 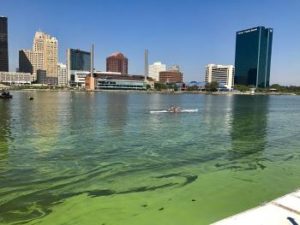 In 2014, heavy rains in the spring and high heats in the early summer created the perfect conditions for a massive toxic algal bloom. The bloom was so bad, it’s cartoon-like green color could be seen from satellite images hundreds of miles from the surface of the Earth. Several rounds of testing indicated that the city of Toledo’s drinking water supply had been contaminated with microcystin – a toxin produced by cyanobacteria – which lead to an order not to use the tap water.

Nearly half-a-million people were not able to use their water for three days. Health officials were alerted in the middle of the night that things weren’t right with the water coming out of the taps. Massive alerts went out. People went door-to-door trying to alert neighbors and protect their community. Hospitals, schools, and businesses had to shut down and bottled water was shipped in by the National Guard. It is still being discovered how much damage was caused to the economy and to public health from this crisis and the threat of another record bloom still remains. 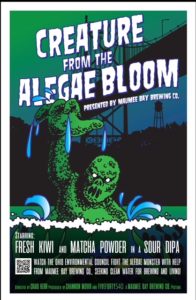 One of the many small businesses caught in the middle of the water crisis was Maumee Bay Brewing Company. This small craft brewery in downtown Toledo was forced to close its three restaurants and halt all beer production for three days during the water shut off.

The Brewery, like everyone else in Toledo, didn’t exactly know exactly what was going on with the water.  Once the water was turned back on, local and state leaders ensured residents that the water was safe and not to worry. Many assumed that the people in charge knew how to fix it. But summer after summer, the algae has returned to the shores of Lake Erie, bringing into question the security and safety of the drinking water in the City of Toledo.

Seeing little meaningful response by their elected leaders, Maumee Bay Brewery decided to become more vocal in defending the quality and sustainability of their beer’s main ingredient, water. Representatives from the Brewery have even traveled to Washington D.C. to educate members of congress about the impact the algae issue has caused for their business and the Toledo community.

While there has not been another disruption to Toledo’s water service, the presence of the algae has been consistent and there is no guarantee that such a contamination won’t happen again. The 2018 Lake Erie harmful algal bloom is projected to be another top 10 year.

What is being done to prevent Algal Blooms? 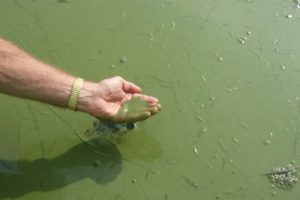 In June 2015, Ohio Governor John Kasich, along with Michigan Governor Rick Snyder and Ontario Premier Kathleen Wynne, signed an agreement to reduce the amount of phosphorus pollution flowing into the western Lake Erie basin by 40% by 2025, with an aspirational goal of 20% by 2020. Also in 2015, the Ohio General Assembly passed Senate Bill 1, a piece of legislation restricting the spreading of manure and chemical fertilizer when the ground is frozen or saturated or when there will be a 50% or greater chance of precipitation that day, required wastewater treatment plants to monitor their phosphorus discharges, and other measures to protect Lake Erie.

Since then, little has been done to actually cut back on nutrient usage and the state is not on track to meet its 2025 phosphorus reduction goal. This year the state and national governments involved in the phosphorus reduction agreement developed domestic actions plans  to address nutrient loading and harmful algal blooms in Lake Erie. Unfortunately, these plans rely on voluntary measures and don’t have enough accountability for meeting our water quality goals. The severity of the problem was recently highlighted when the Ohio Environmental Protection Agency (OEPA) designated western Lake Erie as impaired due to algae under the Clean Water Act.

Although this designation does not guarantee any additional action or funding it formally acknowledges how far off we are from fixing Lake Erie. In an attempt to do more in July of 2018, Ohio Governor John Kasich signed an executive order that if implemented would designate 8 watersheds in northwestern Ohio as “distressed”. This designation would set requirements for agricultural operations in these areas to develop and use nutrient management plans to prevent nutrient runoff. These plans would require agricultural operators to develop a written document detailing how major plant nutrients will be managed on the farm to protect water quality and hold them accountable if the plans are not implemented correctly.

In July 2019, the National Oceanic Atmospheric Administration (NOAA) predicted yet another top-10 largest algal bloom in Lake Erie for this summer and fall. This bloom will undoubtedly have an adverse effect on Lake Erie communities and businesses alike.

What can you do to help?

The best thing you can do is what you’re doing right now, educating yourself and reading about the issues surrounding toxic algae and spreading awareness to your friends and family. The OEC is committed to establishing better policies but pushing for new legislation takes a lot of resources. With your donations, we can be in the offices of lawmakers more and we can spread awareness to Ohioans across the state. Your support directly impacts public health and the environment.