Celebrating Juneteenth 2022 at the OEC

Join the OEC team in celebrating the Juneteenth holiday this year. Juneteenth is an annual holiday commemorating the end of slavery in the United States and symbolizes Black American freedom and achievement. It is also known as “Freedom Day” or “Emancipation Day.”

On June 19th, 1865, Union General Gordan Granger arrived in Galveston, Texas to announce that more than 250,000 enslaved Black people in the state were freed. This happened over two years after the Emancipation Proclamation was issued on January 1st, 1863, and nearly a century after the Declaration of Independence of the United States was adopted on July 4th, 1776.

The newly freed Black Americans rejoiced by praying, dancing, and gathering for community feasts. Since then, Juneteenth has been celebrated annually in various ways: family cookouts and family sporting events with food as an integral element, storytelling and religious services, and larger events like parades and festivals. Celebrations spread out of the South as millions of Black Americans moved to the upper east coast, the west, and especially to the Midwest during the Great Migration from the early to mid-20th century.

As #Juneteenth approaches, you’ll start to see various symbols of Blackness across the country. But did you know there’s a specific flag for the holiday? @kenyathehunter spoke with the flag’s creator to learn more about its history and impact. https://t.co/cAJxzSddHl

Juneteenth also has its own holiday flag. In 1997, a community organizer and activist named Ben Haith created the design now widely used today. In an interview with Capital B News—a local-national news nonprofit that centers Black voices, audience needs and experiences—Haith explained his careful color choice of red, white, and blue for the Juneteenth flag as “a reminder that Black Americans descended from slaves are exactly that: American.”

Black Americans worked for decades trying to make Juneteenth a federal holiday, and in 2007, Texas became the first state in the nation to recognize Juneteenth as a paid holiday after legislation introduced by State Representative Al Edwards was passed. Many states did the same in the years to follow. 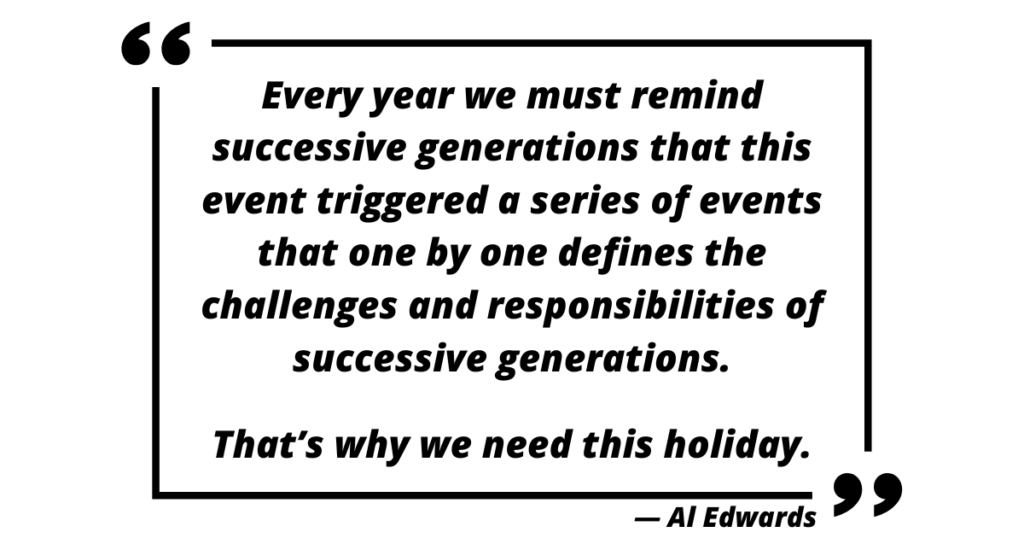 While many Black Americans have been celebrating for generations, Juneteenth only just became a federally-recognized holiday last year after the U.S. House voted to make Juneteenth the 12th federal holiday. The bill, designating June 19th as “Juneteenth National Independence Day” was signed by President Joe Biden into law on June 17th, 2021.

Juneteenth is not just a celebration of the end of slavery in the United States. The holiday also serves as an important reminder of the continuing struggle for true and full freedom in the years that followed the Civil War, and the struggle that continues for Black Americans today.

Celebrating Juneteenth at the OEC

Here at the Ohio Environmental Council, we too will observe Juneteenth as a paid annual holiday for the second time in our organization’s more than 50 year history.

We encourage you to join our staff in honoring this important holiday, spending spend time to reflect, and advancing equity and justice in our communities and the environmental movement:

As we honor and celebrate Juneteenth in our communities across the state, we acknowledge that Black people are still not treated equally in America and we have significant work to do to eradicate systemic racism in our country and in the environmental movement. At the OEC, we recognize that the right to breathe fresh air, drink clean water, and safely access nearby nature has been denied to people of color for far too long. These environmental injustices occur across Ohio and the country: we must be part of the solution. We are committed to combating racism and its pervasive, dangerous impacts every day as well as actively working alongside our partners in the fight for an equitable future.

Juneteenth at the OEC

Reflection: Juneteenth at the OEC