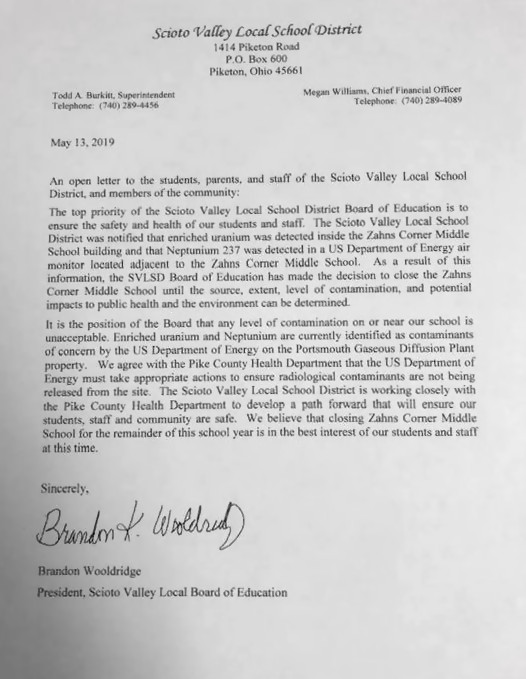 Our public schools should be spaces where learning can occur without threats — both physical and environmental. Unfortunately for many communities, that safety is not guaranteed. The Zahn’s Corner Middle School in Pike County was closed by its school board after enriched uranium was detected inside the building. A U.S. Department of Energy air monitor adjacent to the middle school also detected a byproduct of nuclear reactors and plutonium production called Neptunium 237.

The school is approximately five miles from the Portsmouth Gaseous Diffusion Plant property, which produced enriched uranium from 1954 to 2001. The Department of Energy is currently conducting an environmental cleanup of the site while planning a nuclear waste disposal facility on-site.

Exposure to radioactive materials for a prolonged basis, especially in adolescents, can increase risk of particular cancers, including bone cancer. Environmental risks jeopardizing the safety of our children should be rarities, but in Southeast Ohio they occur far too often.

The region is home to diverse energy industries and shoulders the burden of those extractive industries. Coal-fired power plants, uranium enrichment, and oil and gas pipelines all place Appalachian Ohio in the crosshairs of different public health risks. The region depends on these industries as economic drivers, but this development comes with detrimental costs to our schools, our public dollars, and future generations.

In 2018, Powhatan Elementary in Belmont County closed due to an explosion of a nearby XTO well pad. Located within three miles of the school, it burned off methane and other climate altering pollutants for weeks while the company tried to cap the well. Some residents evacuated their homes while other people experienced an increase in respiratory and other health issues.

In 2002, AEP bought out Cheshire, Ohio because the company was violating the Clean Air Act. Residents of the town were paid three times the assessed values of their homes to move while renters were given $25,000 to vacate. AEP then demolished the town, yet Kyger Creek and River Valley schools located a few miles from the polluting plants were left in operation.

However, the schools, including River Valley High School, remained. The community which fed the schools left Cheshire, and its residents spread to various parts of the county, but children still attended the schools. It was not until 2006, when a levy passed via ballot measure, that the school relocated at the public’s expense to a safer and more populated part of the county. As a student who attended from 2002-2006 I observed firsthand the litany of health issues experienced by my fellow classmates.

These are just a few examples of antiquated energy systems negatively impacting our schools. The very fact that our public schools are in such close proximity to these industries is cause for concern; but moreover, it befuddles me that these companies are not responsible for the impacts of their facilities.

Our children should not bear these costs. Our legislators need to promote policy that ensures safe distance and safe operations while holding private companies accountable, saving countless public dollars.