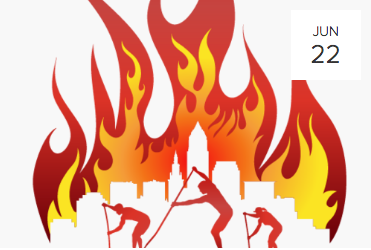 Blazing Paddles is a public celebration of how the Cuyahoga River has risen like a phoenix since the 1969 fire ignited the environmental movement. Paddleboards, kayaks, and canoes will navigate either the 2-mile Carl Stokes Memorial, the 5.7-mile Ruth Patrick Memorial or 13 mile Rachel Carson Memorial (fast canoe/kayak/surf ski only) urban courses that flow past a unique mix of riverfront sites where iconic bridges and pyramids of sand and stone stand in contrast to paved paths and green-spaces. When you participate in Blazing Paddles and recreate on the revitalized Cuyahoga River, you’ll be making a national and global statement about the value of protecting our nation’s natural resources.

The scenic, winding, and protected 5.7-mile course with sweeping views of downtown Cleveland will take you under 10 bridges spanning the river before you reach the race’s iconic turnaround point – the site of the 1952 Cuyahoga River fire. The 13-mile course’s turnaround point will also pass within sight of the 1969 Cuyahoga River fire location. More detail at http://sharetheriver.com/blazing-paddles.

Paddleboard, kayak, and canoe rentals will be available from our participating partners. Details to follow. Registration for Blazing Paddles, an event that’s part of the Kentucky Waterman Series and the Erie Series is now LIVE ($5 early bird discount until May 15) via Paddle Guru at https://paddleguru.com/races/BlazingPaddles2019

After Blazing Paddles, hang out at Rivergate Park for music, beer, food, and camaraderie as we wrap the City of Cleveland/Sustainable Cleveland’s Cuyahoga 50 Anniversary week!