The State of Redistricting

For the latest updates on our fight for fair maps, please click here.

It’s March 2022, and Ohio still does not have fair district maps—for its congressional map or for its statehouse map.

Here’s the problem: certain Republican leaders only want to ensure a rigged redistricting process. The five Republican members of the Ohio Redistricting Commission have continually voted for maps biased toward their own party. Instead of upholding the will of Ohioans, who voted overwhelmingly to end partisan gerrymandering in 2015 and 2018, these politicians have decided to cheat.

They’re trying to rig maps to silence the vote of millions of Republican, Democrat, and Independent Ohio voters. Gerrymandering only benefits partisan and special interests. It encourages extremist supermajority actions in the statehouse and discourages meaningful compromise on issues all Ohioans support, like climate action, investments in renewable energy and safe drinking water, and more.

Where have we been in the fight for fair maps? Check out our timeline here: https://theoec.org/campaigns/redistricting2021/

Where are the Ohio Supreme Court cases heading? Below, we’re giving you the most up-to-date information about the state of redistricting in Ohio.

BREAKING UPDATE: On March 16, 2022, the Ohio Supreme Court struck down gerrymandered statehouse maps for a third time! We’ll have more in-depth updates from our attorneys at the Brennan Center for Justice soon.

The OEC joined the Ohio Organizing Collaborative, the Council on American-Islamic Relations (CAIR-Ohio), as well as individual voters and community leaders (Ahmad Aboukar, Crys­tal Bryant, Samuel Gresham Jr., Pren­tiss Haney, Mikayla Lee, and Pier­rette “Petee” Talley) in a lawsuit appealing the unfair state legislative map in September. Represented by the nationally-acclaimed Brennan Center for Justice at NYU Law and the law firm Reed Smith, we argued that the maps violated the prohibition against partisan gerrymandering and voters’ equal protection under the Ohio constitution.

Our fight for fair General Assembly maps finds its basis in the Article XI, Section 6 of the Ohio Constitution:

The Ohio redistricting commission shall attempt to draw a general assembly district plan that meets all of the following standards:

On February 28, in response to the third set of state legis­lat­ive maps approved on party lines by the Ohio Redis­trict­ing Commis­sion, we filed objec­tions with the Supreme Court of Ohio. We argued that the new maps, like their prede­cessors, viol­ate the Ohio Consti­tu­tion’s prohib­i­tions against partisan gerry­man­der­ing. 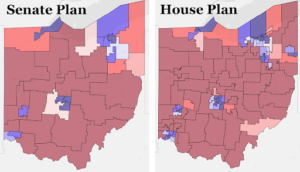 Why is the most recent General Assembly District Plan unconstitutional?

The most recent set of maps were invalidated on March 16, 2022 by a bipartisan majority of the Ohio Supreme Court. The Commission must propose a new map by March 28.

The Congressional District Plan: Also bad for Ohioans and our environment

In addition to our advocacy for fair state legislative maps, the OEC filed an amicus brief in support of the plaintiffs in the case appealing the unfair congressional map in December. Our brief illustrated the environmental injustices perpetuated through gerrymandered maps.

Our fight for fair Congressional maps finds its basis in the Article XIX, Section 1 of the Ohio Constitution:

(a) The general assembly shall not pass a plan that unduly favors or disfavors a political party or its incumbents.

(b) The general assembly shall not unduly split governmental units, giving preference to keeping whole, in the order named, counties, then townships and municipal corporations.

In January, the Court struck down that first map, ruling it an unconstitutional gerrymander violating Article XIX of the Ohio Constitution. The Justices said:

When the dealer stacks the deck in advance, the house usually wins. That perhaps explains how a party that generally musters no more than 55 percent of the statewide popular vote is positioned to reliably win anywhere from 75 percent to 80 percent of the seats in the Ohio congressional delegation. By any rational measure, that skewed result just does not add up. (¶ 100, Regina C. Adams, et al. v. Governor Mike DeWine, et al.)

The Ohio General Assembly had a whole month (most of January and February) to propose a new map, but they took no action. That left the job to the Ohio Redistricting Commission, the same commission consistently gerrymandering statehouse maps.

The Ohio Redistricting Commission continued to cheat Ohioans by passing another gerrymandered map on March 2, 2022. The map ensures the following:

The fight continues at the Ohio Supreme Court for the congressional maps, too. The OEC won’t be filing an amicus brief this time around—Court procedural timelines make it difficult to do so—but we support the efforts of the organizations already objecting to the bad congressional maps. The Court should rule within the next few weeks. 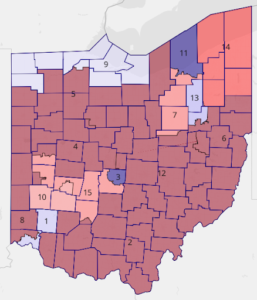 So where does the environment fit in?

And without a fair and truly representative democracy, Ohioans will continue to face environmental injustices from big polluters. Check out our work featured by the Brennan Center for Justice, Yale Climate Connections, and Inside Climate News on this very topic:

When gerrymandering occurs for partisan interests, it often results in other impacts to communities, too, dividing them in haphazard ways along strange lines.

District 1 in this map is likely the best example. In our amicus brief opposing the first congressional plan passed last year, we noted how District 1 divides communities in the Cincinnati area most impacted by environmental hazards: 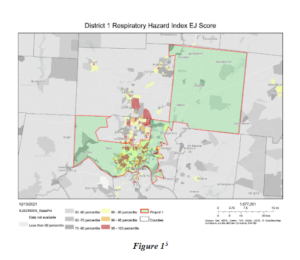 If the district were entirely contained within Hamilton County, keeping many similar communities together, it would not be a district the Republicans could possibly “flip” to acquire almost 90% of Ohio’s congressional delegation. The intention in drawing District 1 was still to favor partisan interests. And at the same time, it cracked apart communities who deserve a representative in Congress who will fight for environmental justice.

And the map’s districts remain relatively compact, keeping communities together. For example, look at how District 1 stays entirely within Hamilton County, keeping those similar communities with one representative. 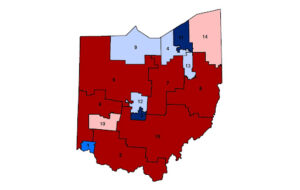 The existence of maps like the OCRC’s map illustrate the partisan bias of the congressional map most recently passed by the Ohio Redistricting Commission. The Republican members of the Commission are trying to ignore the language of the Ohio Constitution and cheat Ohio voters out of fair representation.

When partisan interests hijack the redistricting process, everyone loses, no matter their political beliefs. Ohioans deserve fair maps, both in Columbus and in Washington. When we have fair representation, we can fight back against extremist policies. We can fight for issues all Ohioans support, like clean water and renewable energy.