I ALWAYS FIND A BIT OF INSPIRATION ON THE TRAIL. 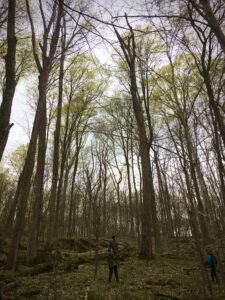 Last spring, my colleagues and I hiked the rolling hills of Malabar Farm State Park. On that crisp spring day, a bounty of native wildflowers welcomed us along the trail: bursting Spring Beauties, unfurling Mayapples, and an incredible hillside of Dutchman’s Breeches. While the wildflowers were a sight for sore eyes after a long winter, the large beech trees towering over the landscape were even more impressive.

This landscape’s beauty moved us deeply that April afternoon. But there was a power beyond beauty here, too. The stories of this place—its recent past and its troubled present—inspired us all the more. This land was part of the homestead and farm of native Ohioan Louis Bromfield, one of the world’s most famous authors from 1920-1940. When he died of cancer in 1956, his close friend, the environmentalist and philanthropist Doris Duke, purchased and saved the woods at Malabar from auction to private parties.

But Doris Duke was not the only one who worked to protect the woods.

On the hike, we were joined by local advocates Dan Hardwick (former Richland County commissioner and spokesperson for the North Central Ohio Land Conservancy) and Eric Miller (an attorney and Conservancy trustee). Both worked for decades to protect this old-growth forest. The public forest immediately adjacent to these woods had recently been commercially timbered. The time to ramp up protection efforts was now.

Ohio was once nearly covered in old-growth forests, but today such a landscape is hard to find. 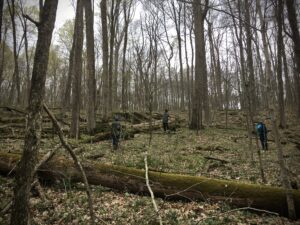 Forests are not mere collections of trees. They are interconnected ecological communities that grow stronger over time. If this mature forest at Malabar Farm State Park were to be logged or clearcut, the entire landscape—including native wildflowers and wildlife habitat—would be scarred not only by machinery, but also by invasive species.

As we hiked, we strategized ways the OEC could support Dan, Eric, and their fellow advocates in protecting this special place. These advocates, alongside North Central Ohio Land Conservancy, had worked with State Senator Mark Romanchuk on legislation to designate the land a state nature preserve.

But we knew we needed more protections to prevent logging of the old growth forest. As my colleagues and I closely watched the state budgeting process, we saw an opportunity to secure such protections.

Through the leadership of local advocates, Sen. Romanchuck, and the OEC, the Ohio General Assembly passed the budget bill in June 2021 with two specific provisions: officially designating 120 acres in Malabar Farm State Park as “Doris Duke Woods” and protecting this old-growth forest from logging. This natural treasure will remain in its strength and its beauty to inspire many more people today and for many generations to come.

Vote Yes on Issue 3 for #MetroParksForAll