The spring equinox occurred yesterday, March 20, at 12:15pm. Spring has officially arrived. Within days, the foreign occupation of Central Ohio’s roadsides, streambanks, and forests will reveal itself. The non-native invasive Amur honeysuckle is the first shrub to leaf out in the spring — often beating out all other natives by a few weeks. For the next few weeks, most of the green we see around us will — counterintuitively — signify a suffering ecosystem. 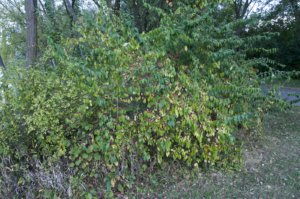 Amur honeysuckle (Lonicera maackii) is Central Ohio’s #1 “Least Wanted” non-native invasive species. Extremely aggressive and invasive, it may just be the most dominant of all plant species in the Central Ohio region. Interestingly, though, it is not considered a “major player” in its native Manchuria (specifically, the Amur River basin running through Russia and China). The species was first introduced to the U.S. in 1897, and for decades was promoted as an ornamental shrub. Big mistake.

Amur honeysuckle forms dense stands that crowd and shade out all competing species, greatly reducing native biodiversity. The species is shade tolerant, and resistant to heat, drought, and severe winter cold. It can and does invade just about everywhere in the Midwest. It is a rapid grower, and when cut it just grows back stronger and denser from the stump. It leafs out early and retains its leaves longer in the fall and early winter than native deciduous species. This gives the species an energy advantage, and helps it shade out the (native) competition. 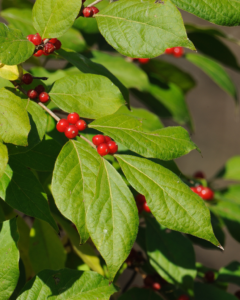 This non-native honeysuckle is also a prolific fruiter. Birds spread its small red berries widely and across long distances. Speaking of, birds often suffer mightily from the honeysuckle occupation. Research shows that several bird species experience significantly greater nest predation when choosing Amur honeysuckle as their home. Its berries are the natural equivalent of junk food — high in sugar, but very low in the fats and nutrients that migrating birds need to survive their long journeys. Unlike the natives it replaces, this shrub also supports very few caterpillar species — rendering it a very poor food source for birds (beyond its “junk food” berries).

As if all this weren’t bad enough, our foreign occupier is also engaging in insidious chemical warfare. Emerging science reveals that Amur honeysuckle secretes chemical compounds that are harmful to amphibians, and fatally toxic to freshwater insects and crustaceans. Terrestrially, the chemicals of this plant also seem to inhibit native plant species — at least one study has found that canopy trees in heavily invaded plots had lower growth rates than trees found in non-invaded areas.

Lastly, the ruby-red berries of Amur honeysuckle are mildly poisonous to humans, and induce severe diarrhea when ingested. 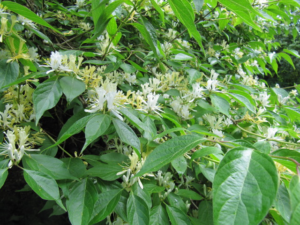 See all that green around you in very early spring? There’s a good chance that it’s Amur honeysuckle. The same goes for very late fall and early winter — this species is typically the last to drop its leaves. The leaves are 2-3 inches in length, opposite along the stem, and end in a sharp point at the tip.

This is a large, deciduous shrub that typically ranges from 6 to 20 feet in height. It tends to have an “arching” growth habit. Flowers are white, aging to yellow, and bloom May through June. Red berries appear in late summer, ripen in late fall, and often persist through the winter.

Mechanical: Fortunately, the root system is fairly shallow. Hand removal may be effective for very small plants or for light infestations. But, be sure to remove the entire plant to prevent resprouting. You can’t just cut them down and leave the stumps — they’ll grow back with a vengeance.

Chemical: Herbicides are the most effective method. A 20% glyphosate solution (e.g., Roundup) can be sprayed or painted onto stumps at the time of cutting. Be sure to always check herbicide labels for details and follow directions. Late summer, fall, or dormant season applications have all proven effective. Avoid herbicide applications during sap-flow (spring) as this lessens the effectiveness of the application.