The Midwest creates 25% of our country’s greenhouse gas emissions, according to a World Resources Institute analysis. As the climate crisis unfolds locally, Ohio has the chance to lead the Heartland into an equitable clean energy future with the Energy Jobs and Justice Act.

After decades of discrimination, it’s time Ohio’s underserved regions that’ve been on the frontlines of extractive and polluting industries are at the center of our state’s needed clean energy transition—and that’s exactly what EJJA’s equity component is poised to do.

Many of Ohio’s Black, Indigenous, and people of color (BIPOC) communities are disproportionately impacted by high energy bills and air 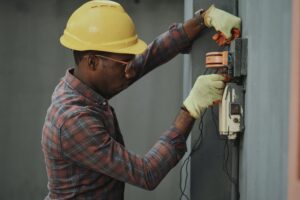 pollution as the result of racially discriminatory policies like redlining. And many low-income Appalachian communities are facing the polluting legacies of extractive industries that found it easier and cheaper to operate in southern and eastern Ohio as the result of federal economic policy, but have since left these communities behind.

EJJA would protect Ohioans from massive rate increases from utilities that would drive their energy bills up. It would also direct resources and support to these communities to reduce the effects of historical racial and economic discrimination, increasing access to safe, affordable clean energy and the jobs that come with it.

Ohio’s current regressive energy policies have also been at the expense of workers. As part of its equity provision, EJJA will establish an Office of Energy Justice to ensure Ohio’s workers can access the critical training necessary to build, scale, operate, and sustain our transition away from polluting fossil fuels to clean energy. The Office of Energy Justice will create at least 15 Ohio Clean Energy Workforce Incubators statewide. These incubators will facilitate Ohio Clean Energy Workforce Programs and Clean Jobs & Environmental Justice Business Accelerator Programs, both of which are centered on advancing BIPOC and low-income communities in the clean energy transition.

With Ohioans trained and ready to deliver clean energy, our state could set an example for what a just, equitable, and transparent clean energy transition could look like throughout the Midwest.

In order to fight climate change and create a healthier environment for all, Ohio must eliminate carbon emissions, reduce energy waste, and level the playing field for renewables. Ohio’s EJJA outlines a plan to reduce carbon emissions economy-wide incrementally. The legislation aims to cut carbon emissions 26% by 2025, 50% by 2030, and a full 100% by 2050.

To achieve this, EJJA would remove Ohio’s excessive red tape on new wind farms, enable community solar no matter where you live, and put money into schools and county governments by sharing revenue from renewable projects.

A justice-centered clean energy transition must also reduce energy waste across the board. EJJA will drive creation of energy waste reduction standards, saving Ohioans money that should already be in our pockets after years of paying for corrupt energy policies.

In 2019, Ohio passed what many consider to be the worst energy law of the 21st century—House Bill 6. A year later, we learned how House Bill 6 was passed as part of the largest corruption scandal in Ohio history. The scandal extended to the Public Utilities Commission of Ohio (PUCO).

If passed, EJJA would write utility accountability and transparency into law, strengthening Ohio’s investigation of utilities suspected of wrongdoing.

The Office of Energy Justice, created by this legislation, would act as a watchdog over the PUCO so it isn’t unduly influenced by utilities. It would root the PUCO’s decisions in environmental and racial justice.

Ohio needs innovative, equitable solutions that are good for our communities and our economy. Together, we can advance bold climate action like the Energy Jobs and Justice Act to secure a healthier future for all Ohioans.

Climate Action, Jobs, & Justice: What the American Jobs Plan would mean for Ohio