This blog was authored in partnership with OEC Law Interns Aubrey Merkle and Eliza VanNess. 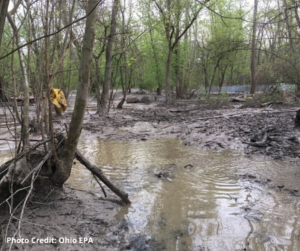 Pipelines are emblematic of the fight for clean, safe, and accessible water, and Ohio is no stranger to pipeline scandals.

The Rover Pipeline runs from Ohio’s eastern edge to its northwestern corner. During construction, Rover spilled millions of gallons of drilling fluid into Ohio waters. The Ohio EPA sued the company to enforce Ohio’s pollution laws, and their dispute now sits before the Ohio Supreme Court.

Put simply, Rover is arguing for a loophole so it can avoid Ohio EPA’s regulations.

Rover claims—after they were caught polluting Ohio’s waters—Ohio missed the one-year deadline. It’s the foundation of their case. If the Ohio EPA did miss the deadline, what powers did it lose?

Rover argues Ohio lost the right to enforce all regulations covered in the application. Ohio argues such a sweeping loss of authority would be contrary to the very nature of the state/federal balance of power—a principle known as cooperative federalism.

Ohio’s regulatory authority over federally-licensed polluters is at stake.

While projects like the Rover Pipeline are always subject to federal regulation, it’s important to maintain state authority over state matters. Ohio’s environmental protection agency is in a better position than the U.S. EPA to oversee the health of its water systems in many instances.

The Ohio Supreme Court’s ruling on this case, expected within the next few months, will determine not only the oversight on the Rover Pipeline, but long standing regulatory principles. A ruling in Rover’s favor would create a loophole by which pipeline companies could submit incomplete applications, wait a year, and then claim Ohio EPA lost its right to fully regulate the project. With a new justice on the bench, we’re all waiting to see whether the court will allow such a dangerous precedent to be set.

We’ll be following up with a more complete and detailed analysis of the case in a later blog. For now, we encourage you to read to our amicus brief filed at the Supreme Court and watch the recorded oral arguments from a few weeks ago.