With the Icebreaker Wind Project permit approved, let’s take a look at the details behind the project and the role of the Ohio Environmental Council’s advocacy.

The Icebreaker Wind Project is an innovative six-turbine wind energy demonstration project in Lake Erie that would be the first freshwater offshore wind farm in Ohio, in the United States, and on the continent.

While this is a huge win for our state, it’s past time for Ohio to lead the way in equitable renewable energy generation—particularly after years of opportunities missed due to restrictive policies applied only to renewables. By responsibly developing this offshore wind energy project on Lake Erie, we can not only achieve cleaner air and healthier communities, we can also put Ohio on the map as a leader in renewable energy technologies. 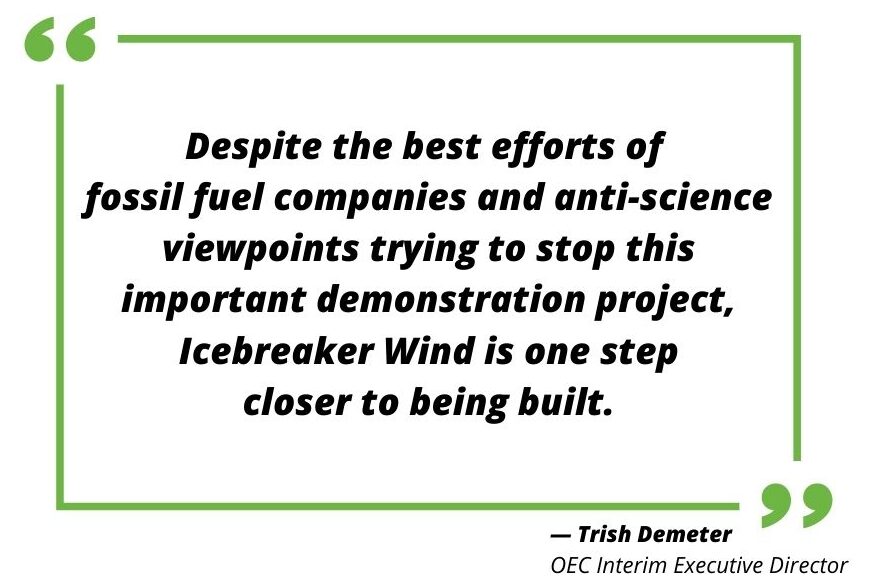 nfortunately though, red tape wasn’t the only thing holding the Icebreaker Wind Project back.

As is the case with many renewable energy projects, fossil fuel interests funded opposition to the Icebreaker Wind Project, specifically bankrupt coal company Murray Energy. While advocates support Icebreaker for its potential to reduce air pollution, fossil fuel interests lobbied against the cleaner, renewable energy future we all deserve. The Icebreaker case is a strong reminder of the inappropriate influence the fossil-fuel industry can have on Ohioans’ access to clean, innovative energy.

Despite this opposition, the Icebreaker Wind Project prevailed. After over a decade of involvement in Ohio Power Siting Board proceedings, reviewing studies on wildlife and ecological impacts, and legally intervening when needed, the OEC continues to uplift this historically significant project as one that will benefit Ohioans for generations to come.

Looking back: A timeline of OEC’s Icebreaker Project involvement

Since 2004, the idea of building a wind farm off the shore of Cleveland has been researched. For more than 10 years, the Ohio Environmental Council has carefully studied, strongly supported, and fiercely defended the Icebreaker Wind Project. Below is a timeline of the project.

Despite the stigma around wind turbine impacts on birds, this project is a big win for Ohio’s wildlife threatened by climate change—and here’s why.

Climate change is one of the biggest threats to birds and wildlife. That’s why the National Audubon Society has encouraged the Ohio Power Siting Board to facilitate responsible, renewable energy power in Ohio. In its comments to the recent proposed rule changes at the Ohio Power Siting Board, the organization said, “Audubon encourages Ohio to take the steps necessary to achieve net-zero carbon emissions economy-wide by 2050.”

Threats to wildlife caused by climate change were and continue to be of the utmost importance for the Icebreaker Wind Project. Throughout the siting process, Lake Erie Energy Development Corporation (LEEDCo) and its partners carefully studied water quality, fisheries, and migratory birds over and around Lake Erie to ensure limited impacts on these species. The project also consulted 42 studies on wildlife impacts from land-based wind farms. Finally, 14 local, state, and federal agencies rigorously vetted the project design, including a final Environmental Assessment released by the Department of Energy in 2018 that found no significant impacts.

Taking this extensive review even further, more studies are already required throughout the pre-construction, construction, and operation phases of the Icebreaker Wind Project. The project’s placement also plays a significant role in protecting wildlife. By placing the turbines 8-10 miles off Lake Erie’s shoreline, the project will not interfere with nesting habitats. The planned height of the turbines is also well below the altitudes of the vast majority of migratory bird paths in the region.

Lastly, when construction moves forward, the project will employ measures to avoid and minimize impacts to birds and bats and perform adaptive management measures if any problems arise. Ohio Department of Natural Resources and Ohio Power Siting Board staff will continue to be involved as the project is constructed.

Clean energy, good jobs, and a boost to the Cleveland-area economy

The Icebreaker Wind Project is a demonstration offshore wind farm—essentially a pilot project—that, once built, will consist of six 3.45 megawatt wind turbines, for a total of 20.7 megawatts. This brings much-needed energy innovation to the region.

In demonstrating what the future of safe, clean energy production around Lake Erie could be, the Icebreaker Wind Project shows much promise for Ohio. Importantly, this project is a strong win for our environment and our economy, helping us combat air pollution and climate change while also creating more than 500 jobs and injecting $253 million into the local economy.

Looking Ahead: Celebrate the win, advocate for more

We celebrate the Ohio Supreme Court’s decision alongside many partners who’ve fought for years to support the Icebreaker Wind Project. Because of our collective advocacy, this important project will help deliver cleaner air to our communities while putting Ohio on the map as a leader in renewable energy technologies.

Although the fossil fuel industry continues to hamper renewable energy development in Ohio, the OEC is committed to our fight to secure clean energy for all who call Ohio home. Even if that fight takes more than a decade, we’ll keep advocating for the healthy environment that all Ohioans deserve.